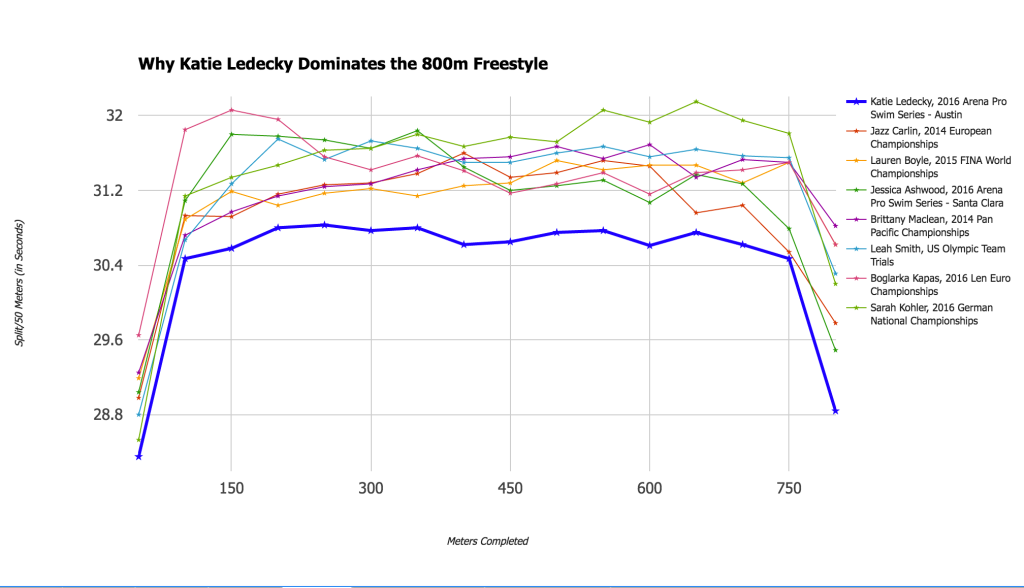 I began paying attention to Katie Ledecky, the American distance swimmer, after Brian Phillips wrote a fantastic profile on her for Grantland, in the fall of 2014. Ledecky was seventeen then; she had been the reigning world record-holder in the women’s 800 meter freestyle for over 2 years. Actually, reigning, which suggests stasis, isn’t the best gerund for Ledecky, who, after whittling nine seconds from her prelims time to seize the gold at the 2012 Olympics*, kept whittling. 8 minutes, 14 seconds. 8 minutes, 13 seconds. 8 minutes, 11 seconds. Since Phillips wrote his piece, Ledecky has continued to get faster and faster; in addition to the 800, she now holds world records in the 400 and the mile — the latter by 17(!!!) seconds.It’s in the mile, as Phillips noted, that Ledecky laps her opponents**. At the elite level, this is, let’s just say, unusual. More unusual: holding world records in both mid-distance and distance events (and in Rio, she’ll be racing the 200 — nearly a sprint!– as well).

In 2014, Phillips was one of the few non-niche sportswriters to cover Ledecky. These days, with Rio upon us and Ledecky our best, surest chance at Olympic aqua-Gold, features abound. Most of them hammer home the following two points: 1) Katie Ledecky is “the greatest athlete in America”/”peerless”,”better at swimming than anyone is at anything”, and 2) Katie Ledecky is really nice. While I LOVE seeing swimming get some mainstream lip service, calling someone unbeatable without offering more than naive straws as to why they are unbeatable is boring, and calling an athlete “nice” is just lazy. Basically, some of these pieces come off like pre-Kimye T-Swift features, is what I’m saying.

Nonetheless, Katie Ledecky, while perhaps not “better at swimming than anyone is at anything,” is going into Rio with a wider berth between her and her competitors than maybe any other athlete. There are a few explanations for this, some to do entirely with Ledecky herself, and some to do with the mechanics of distance swimming.

First, timing. At 11, Ledecky was still a multisport athlete; two years later, she and her then coach, Yuri Suguiyama, were mapping out plans for London. This might seem like a crazy leap, but it is fairly common for previously casual swimmers go through a period of staggering improvement when they hit adolescence.***  For some, this period may be short and followed by a plateau before improvement continues, but for others, like Ledecky, the period can last for years with little abatement.

Second, margins. The press, not particularly hip to the vagaries of distance swimming, are astounded by the number of seconds Ledecky can drop in an 800 or 1500 between meets. For someone on a spate of improvement, dropping two seconds in the 800 over a month is like dropping maybe a tenth of a second in the 100. Think of it as less of a sprint, more of, I dunno, a half-marathon. Even at the elite level, there’s some cushion, especially before you figure out how you want to swim it. (The length of the race is also why Ledecky is able to establish multi-second leads: being a little faster over the course of a 50 multiplies to being a lot faster over the course of a 800 or a 1500). And these margins are why I think distance swimming is so fun to watch: unlike the 50 or the 100, which are decided almost at the dive, or even the 200, the distance events offer a lot of uncertainty — not only in who will win, but how?

I was never a true distance swimmer, so I’m not the most suited to discuss distance race strategies. That being said, there are three common ones:

The last method is the trickiest to manage, because the swimmer needs to know exactly what her maintainable speed is. At the elite level, this method also requires the most endurance and raw strength, because the swimmers are holding nearly race pace for over eight minutes. Ledecky follows this strategy, as do some of the elites who she’ll most likely be swimming against in the prelims and finals at Rio.

Below are the splits for each successive 50m in the 800 for the world’s fastest swimmers in this event, using their best times of the past two years.****

The New Zealand swimmer Lauren Boyle, the German Sarah Kohler, and Ledecky’s teammate Leah Smith swim their middle 700 somewhat evenly (stdevs of .18, .27, .27, respectively), but they don’t close like Ledecky, whose final 50 is within half a second of her first 50. Only Jessica Ashwood (AUS) has a final 50 that is closer to her starting 50 than Ledecky, but Ashwood’s strategy is more of a come-from-behind than any other in this chart.

What this all boils down to — and the reason Ledecky dominates this event — is that she is able to swim fifteen 50s at a pace that is, on average, a half second faster than what any other female swimmer can do. 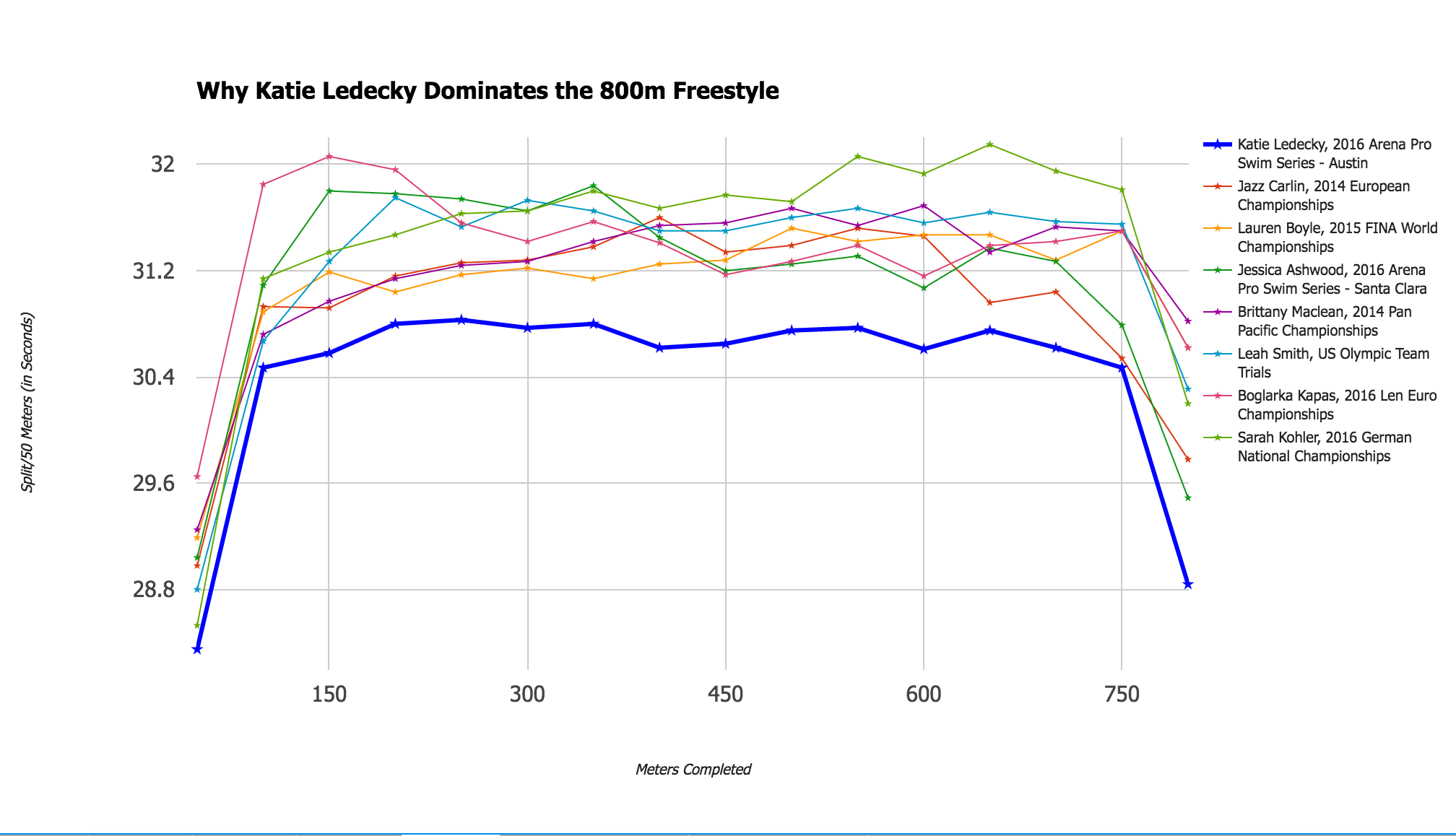 This isn’t a predictions post, as, barring deus ex machina, Ledecky, whose fastest time this year is 12 seconds above that of Jazz Carlin, the runner-up, will win this handily. That said, looking at the data, I’d say that Carlin and Jessica Ashwood might have the best chance at coming within ~7 seconds of Ledecky. Not because their swims are steppe, but because of the opposite: they have relatively weaker middles, and the middle is the most straightforward target for time whittling.

*Wresting crowns from the Brits is always a bit of fun, especially when it’s done under the gaze of the king and queen.

**Though it’s unlikely that you’ll get to see her lap anyone in Rio, as women, ridiculously, are forbidden from racing the mile.

***My own childhood coach attributed this phenomenon, in part, to not knowing enough to overthink, and I see echoes of this in many a profile on top American swimmers.

****Missing Zhang Yuhan, of China, as I was not able to find her splits.