Like many women (and maybe men, too?), I’ve been thinking about what I’d name my children since childhood. Early on, I had a fondness for long, flowery names — Priscilla and Narcissa were particular favorites — as well as actual flowers: Camellia, Dahlia, Poppy. Later, the names came from whatever book I was currently reading, Harriet ceding to Scout to Callie to Viviane to,  more recently, Wavey, Quoyle’s stoic, widowed love interest in The Shipping News. (For this last, I was mercilessly — perhaps deservedly — teased.)

Notice there aren’t any boys’ names in the list above. When I found out I was pregnant, I knew, practically, that I ought to come up with a few; mentally, I couldn’t be bothered until I knew we were having a girl. And besides, my husband had a boys’ shortlist. “Tallulah,” I’d say. “Tom,” he’d reply. “Wendy.” “Frank.” “Hazel.” “Hank.” Actually — I did have one boys’ name: Winthrop. “Win for short,” I reminded my husband, but even then, he couldn’t stomach it.

I couldn’t wrap my head around boys’ names, but eventually, I did start researching gender-neutral names. In the south, it’s fairly common to make first names out of surnames, but of all the surnames on both our family trees, only “Walker” had any sort of ring to it, and that ring struck me as a littletrendy and a little fratty (hot, though). And so, like a good Massachusetts kid, I turned to the Puritans. 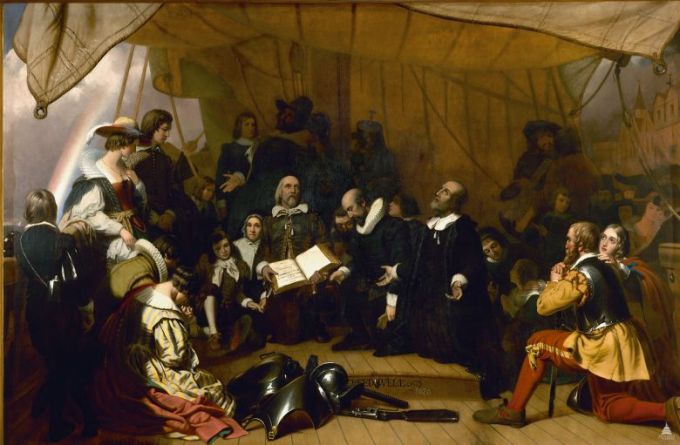 The Puritans were a super dour lot, but when it comes to names, no one can say they weren’t creative. Virtues were popular — not just the typical “Faith” and “Hope” and the less typical “Patience” and “Constance” but “Humility,” “Perseverance,” “Temperance,” “Accepted,” and “Resolved.”  There were commands like “Remember,” “Increase,” “Weep Not,” “Make Peace,” “Praise God,” “Fight the Good Fight of Faith,” and the catchy “Kill Sin” (last name: Pimple. Seriously), along with helpful reminders of human error, like “Humiliation.” There were noncommittal fillers, like “Maybe” and “Nonwithstanding,” and existential dilemmas, like “What God Will,” “Dust and Ashes,” and “Wrestling,”  And then there were the Biblical deep cuts, like Mahershalalhasbaz, and helpful plot summaries, like “Job-raked-out-of-the-ashes.”

All of these are great dinner party fodder, but maybe a little, erm, extra as modern-day first names. But, on the Mayflower’s passenger list, tucked amidst the standard Johns and virtuous Humilitys, I found the names of the two babies born on the ship: Oceanus Hopkins and Peregrine White. Bingo.

My husband was unsure but not full-throatedly opposed. We did some Wikipedia-ing and learned that Oceanus died as toddler, so he was ruled out, but Peregrine? He lived to the grand old age of eighty four, which is basically two hundred in today’s terms. Not only that — he was also jailed for pre-marital sex. Badass!

Both Oceanus and Peregrine are anomalies among Puritan names: neither aspirational nor biblical, they refer to the voyage and voyagers (how meta!). The word “peregrine” is an anglicized version of the Latin peregrinus, “wanderer, outsider, pilgrim” (you may be more familiar with its Italian cognate, “pellegrino”). “Per,” in Latin, means “through, forward, away,”  while agri is the locative of ager, “fields.” Indeed, as I learned in H is for Hawk, peregrine falcons hunt in open spaces, while hawks hunt in forests, which is why the former were used by the nobility, and the latter, by the poor.

My husband liked Peregrine better for a girl, but: “It’s a boy,” the tech told us. Pro tip for those of you who have a baby name picked out that your partner hasn’t entirely committed to: if you start using that name whenever you refer to him/her, eventually, it’ll seem like the only option, especially if you’ve gone ahead and presented it as a done deal to anyone who asks.

Today, Peregrine Willis Loeck is 34 days old. Surely every parent says something along these lines, but he is such a Peregrine: fierce, bright-eyed, prone to rapid movement. Mostly, we call him Per, because he is that, too: quirky and soft and small. If, at five or seven or nine, he is teased for his name, we will tell him he was named after the falcon, the fastest animal on earth. Later, we will tell him that actually, he was named after a little baby who flourished, against all odds, in the harsh wilderness of the new world.