[Writing love letters to my city is, it turns out, both fun and therapeutic. The first three are here; I’ll try to keep ’em coming!] 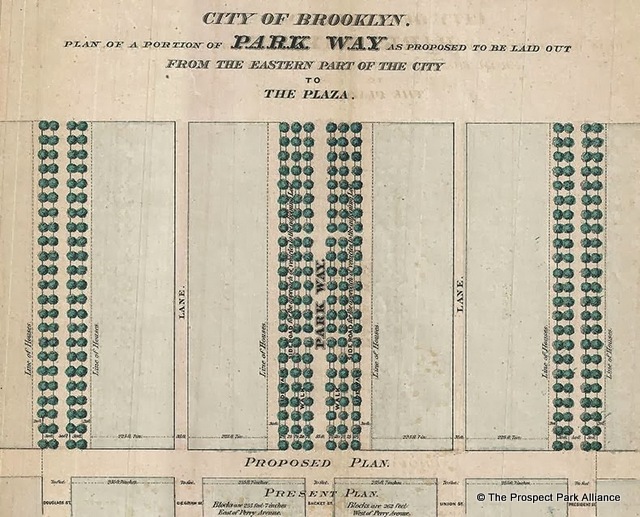 It doesn’t sound particularly nice, does it: “Eastern Parkway.” Sounds like it would be wide and drab and dreary, colorless and featureless. But oh, the part of it that swings like a spine from Grand Army Plaza down through Crown Heights is packed with features, many of them just as lovely as Olmsted and Vaux could have hoped for, when they designed the Parkway, the world’s first, as a place for “pleasure-riding and driving.” 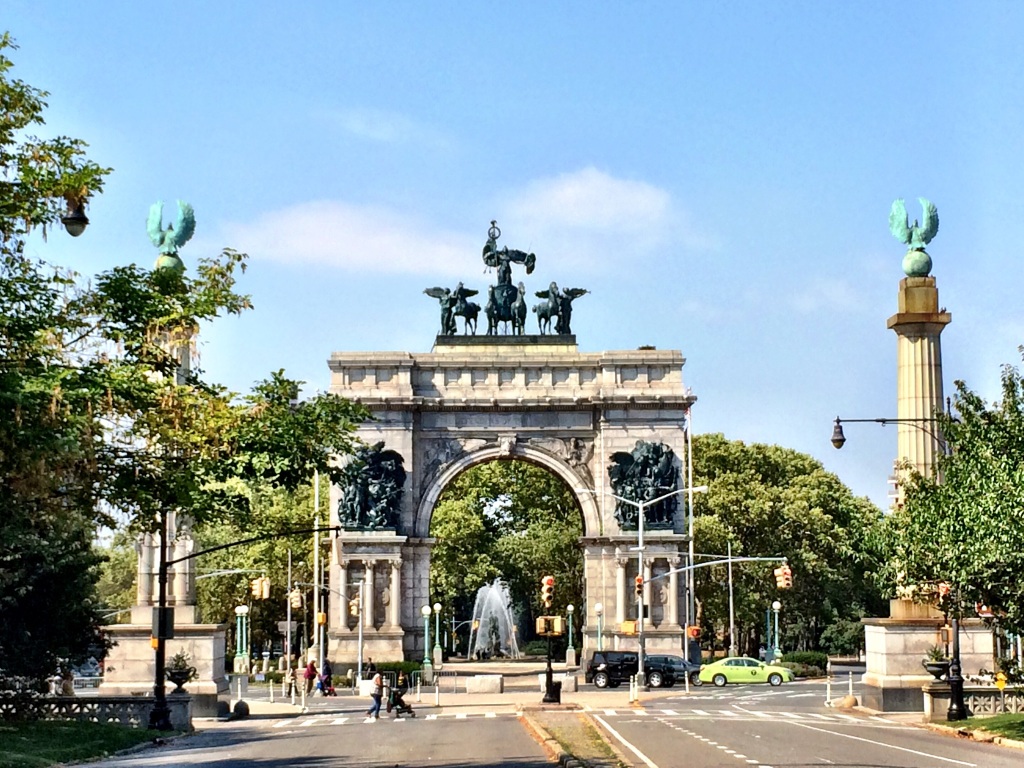 The start is grand: there’s the grand Soldiers’ and Sailors’ arch (presided over by Grant, Lincoln and the winged goddess of victory, and thus a very good place to go if you yourself are in need of a win). There’s the grand Public Library, inlaid with bronze animals and characters and looking very much like a dictator’s tomb. There are many grand old apartment buildings, the kinds with courtyards and ornate cornices, and the Brooklyn Museum, of course, sublimely grand and gleaming white with its contemporary glass collar (and currently packed to the gills, thanks to the fabulous Bowie exhibit). There is also the Botanic Garden, but only its sleek, open-armed entrance is visible from the Parkway, so I’ll leave it out of this love note (it deserves its own, anyhow). 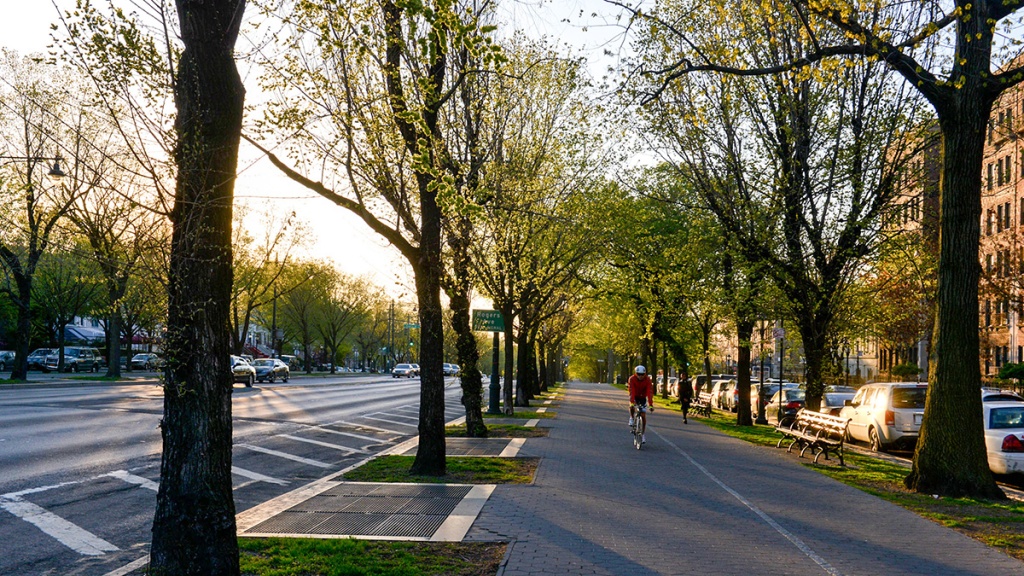 After the Museum, there are a few more grand old piles and many smaller brownstones and rowhouses in stucco and stone and siding. These are less architecturally interesting, but the two pedestrian malls that flank the Parkway are an experience in and of themselves. For one thing, they are bowered with allées of trees, elms and ash and maple and linden, green and dapply in the warmer months, strikingly skeletal in the colder ones. For another, because the Parkway is at the tippy-top of this part of Brooklyn, they offer an urban version of a ridge-line, with views unfurling straight ahead and, at the crosspoints, to the sides with relatively little interruption. Straight ahead is the prettiest view, especially at sunrise: the bower stretches on and on and the figures coming up, the joggers and the stroller-pushers and the cloches of septuagenarian walkers in sensible footwear and the Lubavitchers in their sober blacks and greys and less sober touches of lace are thrown into in dark relief, like chess pieces. 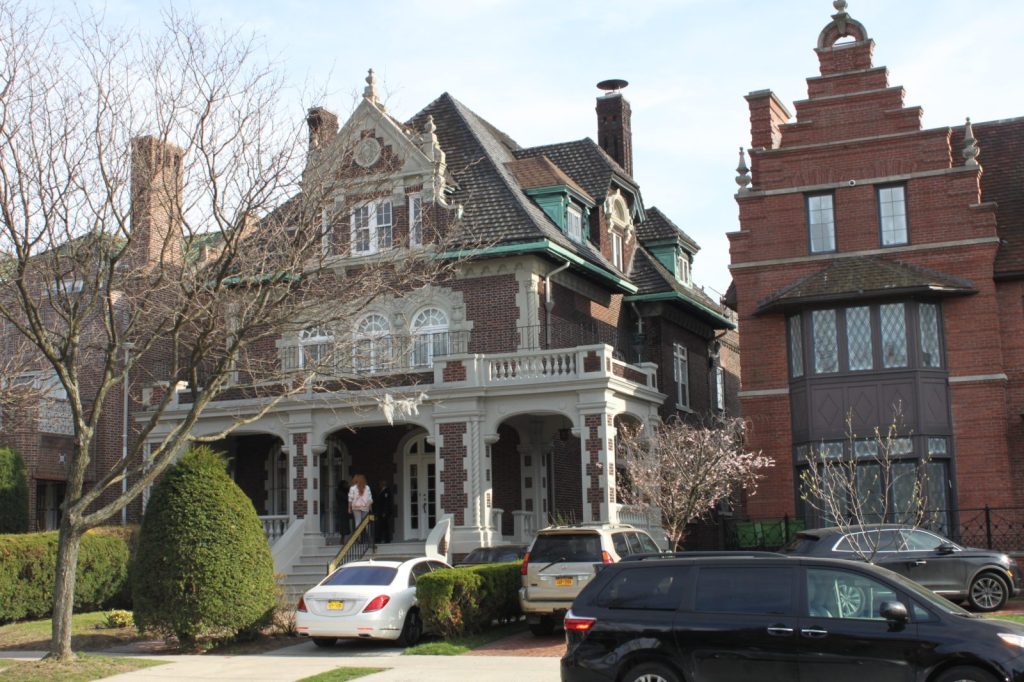 After New York Avenue, it’s worth leaving the Parkway for President street, where there are some truly splendid detached Beaux Art and French/Renaissance/Mediterranean Revival homes. Most are brick, with limestone or marble or brass furbelows; many have velvety lawns and and porte-cocheres and a few even have circular driveways. Once the provenance of wealthy doctors, today the majority belong to the aforementioned Lubavitchers (visit on a Saturday and both the streets and avenues in this area will be thronged with Lubavitcher families and tinny with the klezmer music piped from roving mitzvah tanks).

When you’ve had your fill of ornate splendor, head back over the Parkway to the northern streets, for the short, stucco row houses here are slim and pastel and very much remind me of San Francisco. The light on this side of the parkway feels soft and filtered and the streets are very narrow and there are interesting little restaurants and I always feel almost lost, in a good way. Paris and San Francisco and 1906 in a day — in an hour even! — and for free: this, to be sure, is another reason to love New York.