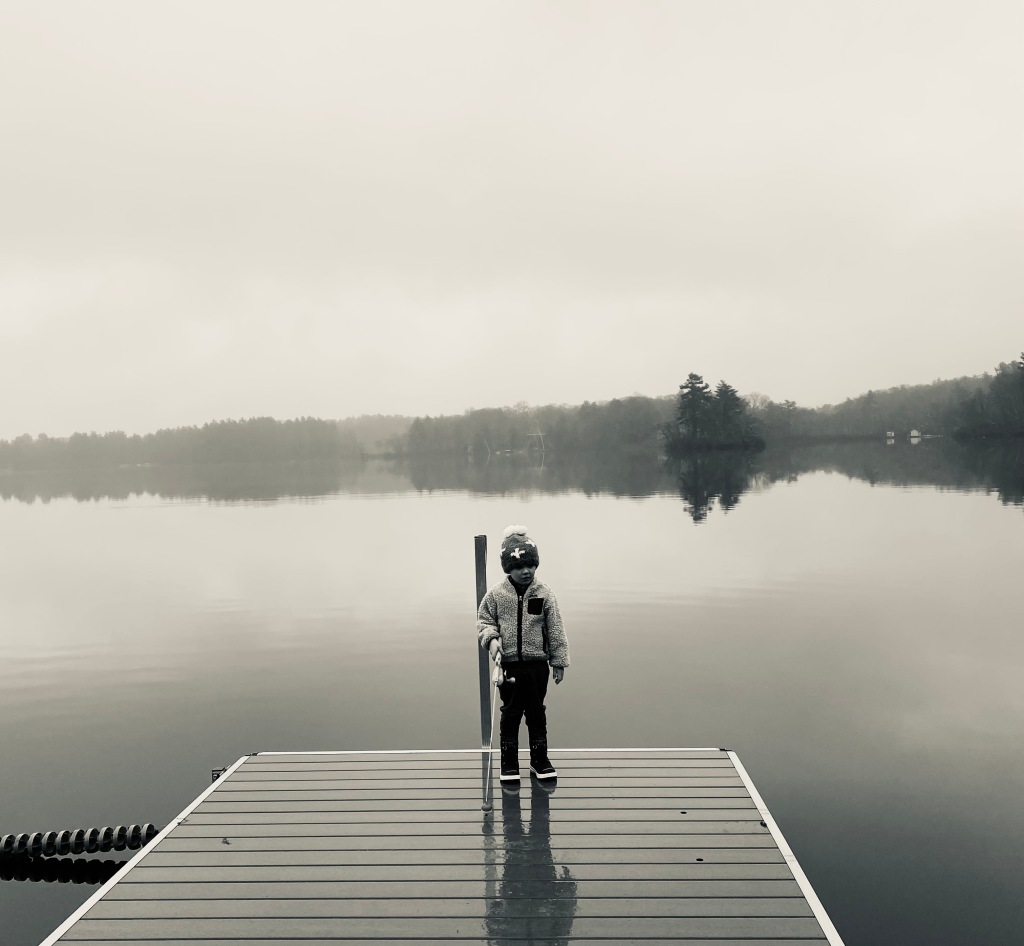 a turn towards the periphery in order to reach the center

My father in law belonged to the camp who write to know what they think. (Joan Didion, also recently deceased, was, famously, a member, along with Flannery O’Connor and E.M Forrester. (Make what you will of my not having quickly unearthed any famous male subscribers.))

I didn’t know this until I read so in a copy of the family chronicles he’d distributed, printed and bound, to his children this past Christmas. By the time it reached me, his writing was incredibly considered. Perhaps I am confusing approach with substance: in re-reading our correspondence, I’m struck by how often he noted his own lack of conclusion about the topic or argument at hand.

Much of this correspondence, which stretches back to shortly after my engagement to his son, in the summer of 2013, took as catalyst articles and criticism published in the New York Review of Books or the New Yorker, to which my father in law would embroider personal history, or related readings, or both. I was honored to be on the receiving end of emails about the renaissance mind of Janet Malcom, or Susan Sontag’s decades-old opposition to the expanded, descriptive uses of “cancer,” or a review of Marilynne Robinson’s novel Jack. I knew my father in law did not suffer fools, though he wouldn’t have used those words; to receive such high-minded correspondence was to be reassured that I was not among them.

When a new email came in, I would star it and draft and redraft responses in my head for days before I felt they’d cohered into a worthy response. That is to say: I agonized over them the way I might a cover letter for a particularly desirable position. And yet, to read them now is to cringe at a mix of earnestness and pretension.

It is a strange exercise to read emails from the dead. The email address feels siloed from its owner, divorced from his demise, and I have the perverse temptation to reply.

But mostly, it is nice, and occasionally eye-opening to re-read them, and to situate them in the greater portrait that has emerged from his writings on family, which he maintained for decades, and the recollections of his friends and children.

I have never seen a draft of anything my father in law has written; I know he was a rigorous, dedicated outliner, but I don’t know how the outline became the lines. “He was a systems man,” my sister in law said, at his funeral. In reading, this meant researching the writer, in order to better understand what had drawn her to the subject. I have done this with fiction, and essays, but never with nonfiction in any of its forms. And yet: how ignorant, literally narrow-minded not to consider the subtext!

On the page and in person, my father in law’s voice was distinctive: descriptively economical, thrifty in its opinions, observationally expansive. It feels cheap to call it classically midwestern, but it is, in style and tone and democratic curiosity, in keeping with what I think of as the prairie school of writers, which ranges back to Laura Ingalls and Willa Cather and forward to Paul Gruchow and Ian Frazier. “Out of Ohio,” the final essay in the latter’s Gone to New York (2005), feels so exactly like something my father in law could have written, with its mild, frank self-interrogation of the ties to the childhood hometown town, the need for it to be understood, or at least known to those in the new town for merits separate from personal import, that I have been turning to it again and again in this past week.

And now an hour has passed as I’ve gone further back through our emails. Here, two essays from Zadie Smith, on the eve and end of Obama’s presidency. Here, a thorough, lively family discussion of the pros and cons of nitrogen as a fertilizer. A comparison of life in Orange City to Lake City. Exchanges on Bill Bryson and and Mary Norris. Our wedding program, annotated with brief observations and – I counted – just two adjectives: “magnificent,” describing the setting, and “unusual,” describing the program itself, along with selected photographs meant to convey the occasion to those unable to attend.

I am committing and recommitting, in this essay, the cardinal sin of telling without showing. It strikes me as wrong to excerpt texts written with no intention of broader publication. An inner battle, because the writing is really very good (and if it were not, I would not be writing this malformed post at all, but rather forging on with one of the many fitful drafts begun and abandoned over the past month).

Unlike my father in law, I do not write to know what I think, and any outlining I do happens after the writing, in limp attempts to define or at least recall what it is that I’ve written. I am profligate with opinions; it would be a great change to observe, note the observation, situate it in some larger context, and then and only then decide what I thought about it.

A sober hand, a steady eye – or twas the other way around? In truth, none of the four abandoned drafts had anything to do with death, or writing, for when I started them, my father in law was alive.

Yesterday, at the lake: skirling mist, pewter water, minky sky. Evergreens just visible across the way; the boathouses all shrouded. Dreamily, I ferried one child to the dock moored a few yards off the shore. Water seeped into the neoprene tops of my muck boots.

“Goddamnit,” I said, as I ferried the second.

“My feet are soaked,” I whined. The boys looked at me pityingly. “I’m sure they have extra boots here,” the older one said. I said I was sure they did not, and who was they anyway? We were alone.

“Goddamnit,” the younger one said. His gruffness pure show. I laughed and watched the older one cast, admired the effect of the cheery red bobber against all that grey.

The younger one dipped his extendable net into the water, fishing for his shadow, which proved frustratingly elusive. “Where’d it GO?” He kept asking. “Where’d the shadow GO?”

“You coming, mom?” he asked, a little later, and I said no, my feet were soaked, remember? But when I stood in the lake, my feet, in their water-rubber cocoon, felt warm.

The older one remarked that this was a good place for fishing (the day before, we’d gone to nameless lake, and his line kept getting caught in the reeds).

“But for this endless mizzle,” I said. A portmanteau I’d picked up in the first few pages of Lauren Groff’s new novel.

“Mizzle tizzel snizzel,” said the elder and the younger, liking the sounds, joined in.

I ferried the boys back to the beach. Squelch squerch, squelch squerch. We walked over to the boat landing and as the mizzle turned to drizzle turned to outright rain I was thrown back to the freighted height of summer, just a few days before Ottie was born. I’d taken the boys to the lake straight from school under a brooding sky. We were halfway up the footpath when I heard the guard’s whistle. Three peals: lightening. It would be impossible to keep the boys out of the water at the swimming beach, so we turned left, made for the boat landing. “Once I see lightening, we go back to the car,” I said, with performative sternness, and then allowed my mind to drift as the boys scrambled up the larger rocks and tossed the smaller ones into the water, pushed the limits of permissible wading, asked, again and again, what this boat was called, and that one, and that one. Sunfish, I said, Canoe. … something cat. Jellycat, I wagered, knowing it was wrong. When the rain came, it was dense, pelting — the kind of rain that jumps up around your shins. We dashed to the car, me ungainly, the boys stopping often to throw their heads back, drink the sky.

In the car, I’d glanced back. Flushed faces, rain-roped hair. Thinking: this might be one of the very last moments before.

And now we’ve got that dividing line after all, and it wasn’t occasioned by the birth of a steampunk hearted daughter and my use of we is wrong (misappropriation) too.

More wrongness or at least emphasis on the wrong syllable: I am writing to a changed audience. My father in law was one of this blog’s regular readers. I’m not sure how he found out about new posts, and we only rarely discussed them, but he would mention them to my husband. Along with my mother, he was one of the few readers I was aware of as I wrote, and while this awareness didn’t change what I wrote about, it did make me more judicious about airing my opinions, less knee-jerk reactive, less snide, less glib.

In the New Yorker, I read about mazes, specifically, those made by the British constructor Adrian Fisher, which aim to entertain and socially jumble more than to frighten. These are not pan’s labyrinth, yet solving them, even for trained maze makers, requires a willingness to ignore instinct. Eg: your natural sense of direction tells you the maze’s center is to the left. Perhaps you are able to peer over the yew and see it is so. Yet the path leading to the left will not take you to the center; the correct path is the one that appears to be taking you away from the center.  One of the signatures of a Fisher maze is “a turn towards the periphery in order to reach the center.”

A turn towards the periphery in order to reach the center. A rebors. Against the grain.

That was one of the articles I’d wanted to ask my father in law about. How does a systems man – a surveyor, no less – approach a maze?

But I mean really: what does it look like? Because it sounds nice. It writes nice. Like deconcentration in free diving, it seems like an approach with broader applications.

There is a scene in Edie Richter Is not Alone, which I’m listening to on tape, that is one of the most gripping and rictus things I’ve read, perhaps ever. If you ended a life out of love, for love, or: out of compassion, or: to stop the buck, this is how it might go. And there is nothing circuitous about it. But the pre-, with its multiplying small agonies and indigities and chipping away at stability and identities, and the utter disorientation of the post-: that’s where the maze is. And how do you turn towards the periphery when you’re in the very center?

And here I’ll break my own reservation and quote my father in law, who wrote, of Marilynne Robinson’s longtime position at the Iowa Writers’ Workshop, a position created in memory of an earlier Iowan whose barns he had spent the summer after his freshman year of college painting: “We are all connected if the common thread can just be found.”