Ándale, Joto, Your Popsicle’s Melting, or Is Mechanical Reproduction Better than No Production at All?

Reality was the theme of English class my junior year of high school. Organic reality versus manufactured reality versus hyperreality. Is something real because you’ve experienced it? Because it looks/feels/smells/tastes just like that other thing, the one you know is real? Is it real because the New York Times said so? Because Brietbart said so? Because it was real for someone, somewhere?

The first text we read was Walter Benjamin’s The Work of Art in the Age of Mechanical Reproduction. Benjamin’s overall thesis was that mechanical reproduction attenuated the original’s “aura,” by which he meant its authenticity and uniqueness, and the authority and even sacredness these confer.

(And yet, these days, how much more do we value that which is labeled original/limited editions/handmade/vintage/one-of-a-kind versus that which is perceived as more mass-market? Did anyone else see “FUBU?”)

One the one hand, the democratizing effect of reproduction was a good thing. More art for more people, and many critical interpretations instead of a single cultic one. On the other, the ease of dissemination made art ripe for political hijacking. Benjamin, a German Jew, wrote the essay shortly after the Nazis had come to power, and few were more insidiously, hideously effective at recasting art in their own message than they.

(And yet — art as politics isn’t always a bad thing! How wonderful are the Obamas’ official portraits, his in particular? There is more to see in them the more you look, but even a quick glance rewards.)

I don’t recall having the above objections on first read. I was seventeen, white, upper middle class, suburban. I might have been the least real anyone ever was.

No, what I remember was realizing that the images so readily available to me — the Mona Lisa, the Grand Canyon, Rushmore — were just that: images. I didn’t even know if they were fair approximations of the originals. Perhaps the Mona Lisa that hung at the Louvre looked almost nothing like the little print that hung on my wall. 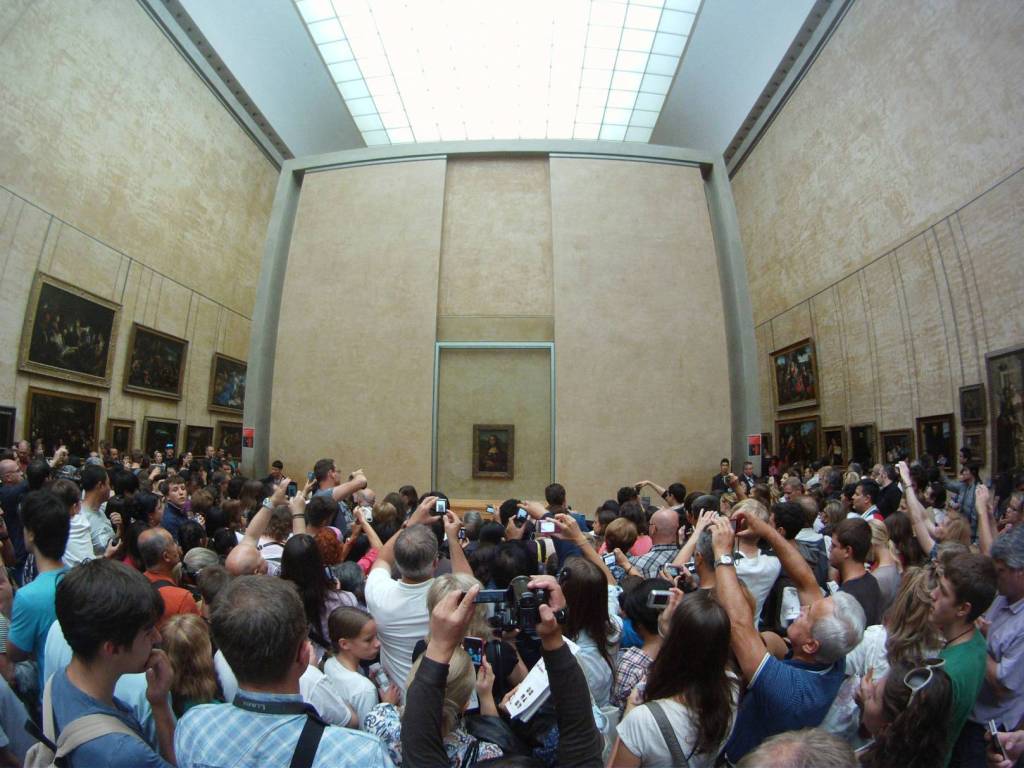 But. The print that hung on my wall — the woman in it was bewitching, composed, rife with enigma. And maybe I painted those characteristics upon her myself, but did it matter in the end? Wasn’t seeing the reproduction better than not seeing the real thing?

(Later, we would read Loss of the Creature and I would learn that I might never, ever see the real thing. That the real thing was visible only to aliens, or people crawling out from under massive rocks. (On the other hand, I had a decent chance of seeing a dogfish!))

Benjamin was talking about the mechanical reproduction of art and its impact on life, but I’ve been thinking about the mechanical reproduction of life itself. Because that is, largely, how I’ve got on since going back to work: by filling my days with the things I can do mechanically: running analyses and and putting together reports based on scripts and templates I figured out half a year ago, or more; buying multiple cold brews, at $4.50 a pop; fiddling with streaky pump parts in a beige chair in the mother’s room, the one by the studio that bleeds scruffy young PAs. Running. Not writing fiction. Or writing and rewriting the same paragraph, until it is not a paragraph but an unordered list of fragments. The machines clatter on, but the foreman is napping, or else trapped in a broom closet on the fourth floor, the one that’s been closed for years.

The last time my life was so mechanically lived was when I was seventeen, which is perhaps what made me think of the Benjamin. Then, it was a question of time and also, a semi-paralysis engendered by a hyper-focus on appearance. I would get all of my homework done in class and study hall so that I could rush to high school swim practice and then club swim practice, and then I would come home around nine and wolf the less fattening parts of dinner, and then I would stand in the shower, staring at the smatter of spots above my chest, which would blotch redder and redder as I worried them. But also, bone was visible above and below them, rib bones and hip bones and knobbley knees. I would vacillicate from displeasure over the spots to pleasure over the bones until twenty minutes had passed and my sister was shouting at me over the hot water’s disappearance. I would lifeguard in order to buy new Seven jeans, the ones with the A pockets, and then I would lifeguard more, to buy more, until most of my non-school hours were spent in a pool or staring at one. I would write essays that were seventy-five percent quotes. I stopped playing piano so I could swim more, even though I was injured, and more was less. That was the real rub of it: all this swimming and I was too injured to be any good, and the swimming made it worse, and yet I couldn’t stop. I didn’t know who I would be if I stopped. Soft, I thought. Fat. I smelled only of chlorine and Ben-Gay, and I ate enough Advil to burn a hole through my stomach.

And yet! I was not depressed; I was not troubled or particularly unhappy. I liked being thin, and wearing $200 jeans, and tumbling into starry drunkenness with my boyfriend, who loved The Big Lebowski and took three months to work up the nerves to kiss me. I liked getting straight A’s without working too hard for them, and I liked, too, the times the machinery stopped for a moment, and actual flashes of insight penetrated the haze. And most of these were in English class, on the subject of reality. Such as: the person best equipped to understand a Shakespeare sonnet is the one who was expecting a dogfish. Such as: it is impossible to truly see the Grand Canyon. Such as: a map could eventually replace its subject. Such as: a true story isn’t always true. Such as: there is no cat; there is no cradle — but there was, only a moment ago.

The comforting thing about that period of my life — which, if I’m being honest, extended, in some fashion, for years after, until skin-and-bone thinness finally lost its allure — is that I remember those flashes of insight. Remember them better than I do almost anything else, in fact. And perhaps that is why my feelings towards this new period of mechanical reproduction skew more towards acceptance than resignation. Yes, I haven’t written much in almost a month — but what is a month in a lifetime? Yes, my intellect is on ice — but ice thaws.

That is another effect of mechanical reproduction: ellipses. Once, a teacher told me I had a gift for elision. Now, I go into my mind to retrieve something and forget what I’m looking for midway through.

According to Rachel Cusk, the original meaning of ellipses is “to hide behind silence.” But I’m not hiding or silent, only muddling.

I am bearing witness to the dizzying growth of a new … well, intellect sounds a bit much, but: mind, anyhow. And being. Who grabs at chicken curry and chortles at rumbly sounds and beams anytime a stranger catches his eye. Such fortune is worth compressions of time and sleep and their ensuing mechanical reproductions and intellectual deep-freezes.

And so. What was this essay? I hardly know. If you are in the thick of work and new parenthood, well, there are two of us. (Ha! There are so, so many of us! And to the single working parents: Herculean, you are!) Be kind to yourselves, even if you are not in the habit of doing so. Forsake your old needy darlings for your new ones. Or don’t! Throw literature into the embers of your intellect. Or don’t!

Do read Loss of the Creature, though. And find yourself a dogfish, even if it is a dogfish disguised as a baby.

Book Talk, Motherhood
Art in the Age of Mechanical Reproduction, Loss of the Creature, Walker Percy, Walter Benjamin
← Is Motherhood a Tattoo or a Shadow on the Sand: Some Thoughts on Identity in the Novel Outline
→ How to Love New York: The Staten Island Pizza Rats