How to Love New York: The Staten Island Pizza Rats 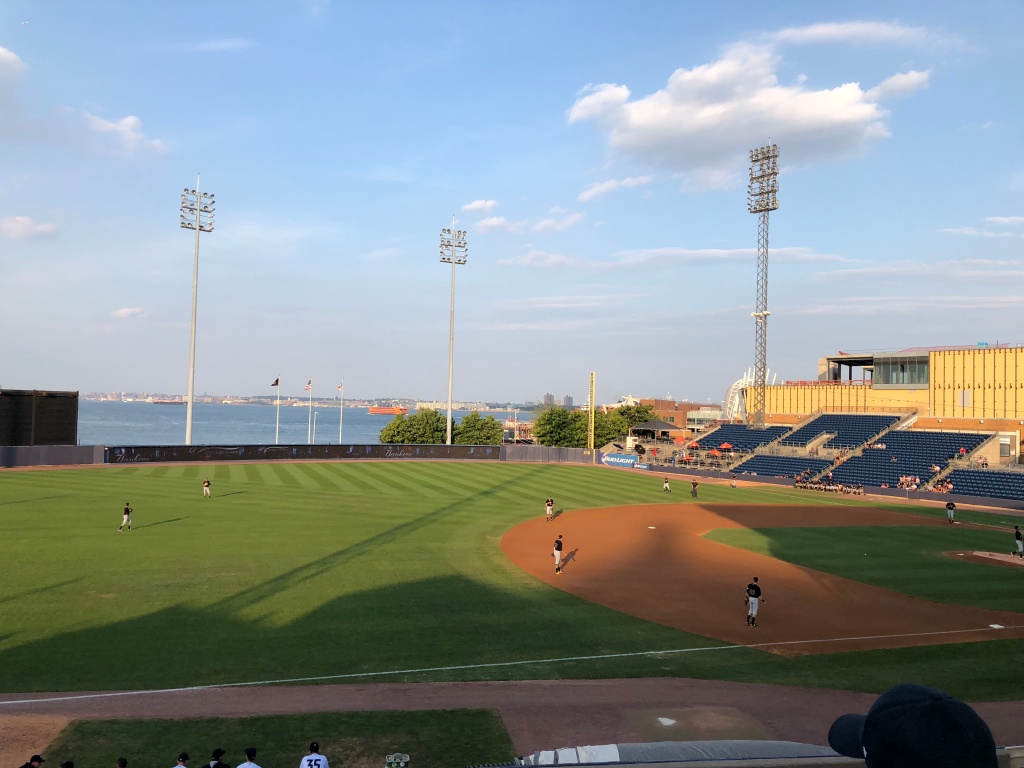 Well those are four words I never expected to string together, and certainly not in an homage to this city. (More homages here and here.)

I’ve realized that many of the parts of New York I love most are the ones that make it feel small and knowable. I don’t know if it’s the unexpectedness of them, or some innate contrariness on my part or because I grew up in a small, knowable place. Go live in the country, why don’t I? But I don’t want to; I want my hurricane with its quiet eyes.

The Staten Island Pizza Rats are the Yankees’ farm team*, but they are worlds apart from the major league slickness of the pinstripes and Yankee Stadium. The players seemed to be either very young or old; for the most part, they did not strike me as being much better than a d3 college team. The stadium is small, and hangs like an open jaw over the harbor; all the seats face the water, and beyond the lip of highway with its truck bed teeth you can see tug boats and ferries and the occasional monstrous cruise ship.

Last night, the stadium was half empty—but it didn’t feel empty. The announcers were congenial and the hype men and women (teenagers, mostly) were spirited. There was also a contingent of hecklers — young men in faded Pizza Rats shirts and backwards UnderArmor caps who could have been spending their Saturday nights getting drunk at a bar but instead had decided to invest enough time in a minor league team to know each of the players by name and stats and Achilles heels. I liked that there were hecklers, I guess is what I’m saying. Hecklers and kids, of which there were many, crawling over the seats and mobbing the mascot, a faux-bashful cow named Scooter.

During the changeovers, there were silly, pizza-themed games, and I was asked to play one that had me rattle off as many pizza toppings as I could in ten seconds.  I sailed through ten and then, stuck, blurted “peanut,” but even so I beat the Pizza Rat short stop. I did not receive a prize (“the prizes are for the kids,” the announcer whispered after the camera had panned away), but who am I kidding: being on the Jumbotron was the prize! 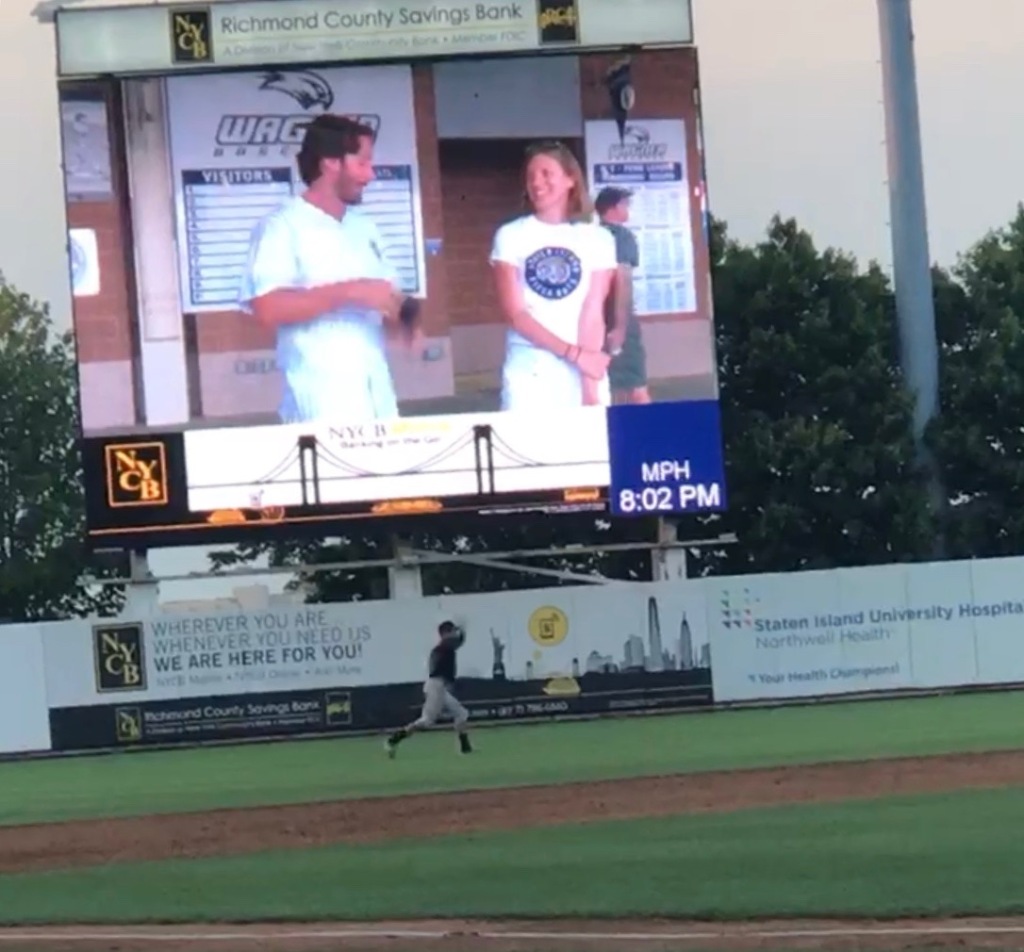 The Pizza Rats were playing the West Virginia Black Bears, and by the sixth inning, the hecklers had gotten the words to “West Virginia” down pat; when the rest of the stadium joined in, the song sounded pretty, and the West Virginian dugout joined in. I don’t know who won the game, but the low-budget, murky stakes of playing had a real cinematic or else a short story quality. The  players were not larger than life, and I wondered what their lives were like: were they on the road all the time? Did they have other jobs? Did they travel by plane or coach or sprinter van? Van, I figured, and I wanted to be a fly on the wall of that van.

At the end of the game, there was a fireworks show. A really good one, right up close, with a wide variety of colors and shapes and sounds, and when it was over, the air around the stadium was grey and drifting. And then the kids were invited to run the bases, and my friend slipped in from the wrong gate and joined them, going the wrong way and crossing home plate first. 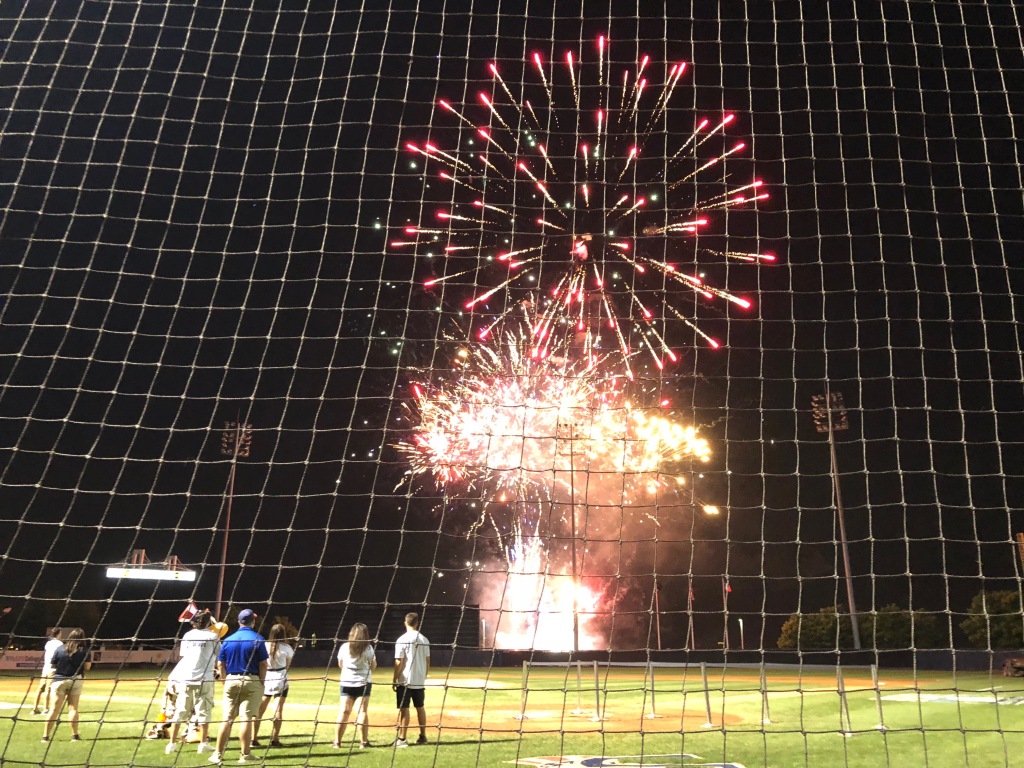 There are other reasons to go to Staten Island, I’m sure, but this is a fine one, and a purely summer way to spend a Saturday evening.

*Technically, they are only called the Pizza Rats on Saturday nights; they rest of the time, they are just the Staten Island Yankees. But where’s the fun in that?

New York
Baseball, New York Yankees, Staten Island, Staten Island Pizza Rats
← Ándale, Joto, Your Popsicle’s Melting, or Is Mechanical Reproduction Better than No Production at All?
→ If You Squint