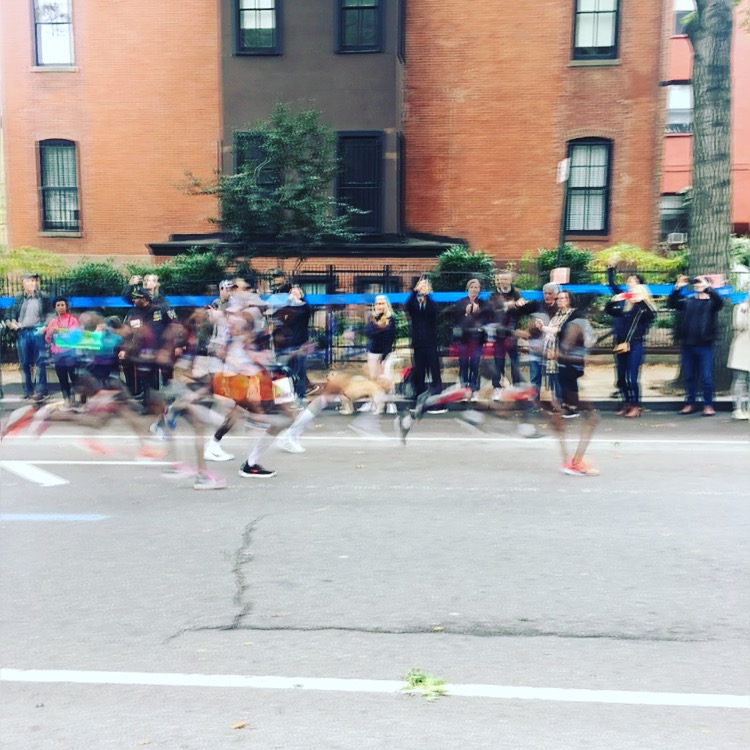 How to Love New York: Spectating (or Running) the New York Marathon

It occurs to me, on this Saturday before Marathon Sunday, that this date has not come up in my scattered set of posts on loving this city. Ridiculous oversight, now remedied. Marathon Sunday is my favorite day of the year to be in New York. As the promotional posters avow, It Will Move You — in part because of the runners, yes, but also because of the spectators. Never does the city feel as communally festive as on Marathon Sunday. I’ve had the great privilege of living along the course’s eighth mile for the past seven years, and let me tell you: on Marathon Sunday, the spectators of Fort Greene Bring. It. The Bishop Loughlin marching band turns out; there’s a large drum circle and a man with a serious speaker set up blasting Rocky and Sinatra from his stoop. It’s like Thanksgiving vibes mixed with the night Prince died, when Spike Lee threw a block party. The crowds fill both sidewalks and invariably spill over the caution tape and into the emptied car lane in order to high-five the runners. There are cowbells and vuvuzelas and so many signs. There are people who’ve come from the other side of the world to cheer on their dearly beloveds and oldtimers and medium-timers like us and newtimers who can’t believe, as I couldn’t, that this is their New York. Having now run this marathon, as I’ll get into, I can confirm what I’d read in many NYCM recaps: the eighth mile is the best mile. (To be fair, there are stretches of Harlem that ought to be as good, in terms of crowd support, but they have the distinct disadvantage of coming very late in the game, at a point when even runners who’ve run a smart race are hurting.)

What I do, typically, is double-dip: first I go out around 9:30 and catch the wheel-chair runners and the elite women, and then I go back inside for fifteen minutes or so to warm up before heading back out to catch the elite men and the rest of wave one and some of wave two. A really good spectator would stay til the bitter end, or even just concentrate on wave three, because, generally speaking, those are the runners who will be on their feet the longest and could (I think — I’m generalizing here) use the support the most. Culpa mea. I will say, however, that I am a very enthusiastic cheerer. Maybe it’s the former team captain and coach in me, but I love to cheer, and what’s more fun than cheering people who’ve put their heart and soul and pocketbooks into something for three, four, five months and are right now doing it, almost a third of the way in, and feeling, most of them, pretty goooood? Nothing is more fun, is the answer. And what you should do, if you’re going to cheer, is cheer for specific people. Lots of runners will have their names on their shirts, which is the most helpful, but others will have their country or their running club. The NYPD and NYFD will have their departments. There will also be many, many costumes. And then there are the large contingent of Achilles runners and guides, in neon green. A friend of mine ran as a guide almost every year he lived here, which never failed to amaze me. Of course the Achilles runners themselves are incredibly inspiring, but the guides — how selfless, to run someone else’s marathon! Both times I ran a marathon, it was an entirely selfish act.

As I mentioned earlier, I finally experienced the running side of the New York Marathon last year, after signing up on something of a whim early on in my maternity leave. I’ve wanted to run Boston for ages, after a childhood spent cheering its runners alongside the famous Wellesley College scream tunnel contingent (come to think of it, maybe that’s where my love of vigorous cheering originates) but New York was a relatively recent bucket list addition. I’d read of runners, serious ones, returning to the sport post-baby faster than ever; I believed it of them, but was less sure the same would be true for me. Signing up for a marathon seemed like a good insurance policy. Over the next six months, the fact of it kind of glowered in the back of my head, stirring itself every once in a while to remind me that I needed to raise or fork over $2500 (thank you to all the kind souls who contributed to what was, as noted, a SELFISH endeavour), and also that, hello, I’d be having bunion surgery in mid-June, so maybe this was a dumb idea. And then, quite quickly, it was July and I’d recovered, more or less, from the bunion surgery and it was time to start training. Which I did in the most minimal way possible, but even so, three and a half months is not a whole lot of time. On the other hand, I had a seven, eight, nine-month old and a fairly hectic day job, so I was kind of stealing from Peter to pay Paul with the time I did give. Thank heavens for jogging strollers, or I’d have really been in the red! (My “training plan,” if you’re interested, consisted of the same two or three four and five milers I normally did, plus a long run. The long run, in other words, was the only new addition, and I do believe it’s the one non-negotiable part of marathon training, though of course speedwork and tempo runs and strength work are nice, if you can swing them.)

At any rate, M-Day arrived, and I was reasonably prepared, though plenty jittery, as I took the 4 to Bowling Green and headed, in the dark, amidst scads and scads of runners, to the Staten Island Ferry. There were a lot of people in groups, teams and friends and maybe people who’d just met that day and were friendlier than I, but I didn’t mind being solo; it was thrill enough to be a part of at all, and to sit looking out of a porthole as the sun rose orange over the Verrazzano. I took the latest ferry wave one was permitted to take, and had just enough time to do the requisite milling about and bagel ingesting and stretching before it was time to head to the corrals. The corrals are assigned by estimated finish time, and for some reason, the NYRR, which organizes the NYCM, bases this not on previous marathons or even half marathons, but on the splits from the most relevant NYRR race you’ve done. Which, in my case, was a disastrously hungover St. Patty’s Day 5K I ran when I was twenty three. Hungover or no, my 5K pace is always going to be faster than my marathon pace. This I knew and told myself o’er and o’er right up until I walked into corral C, when I saw the 3:20 pacer and promptly signed up for a date with hubris. Hubris is a poor bedfellow for a marathon, but for as long as you can last, he’s also a fun one; thinking back on it, I’d rather have run the race I did, going out fast and fading in the back eight, than one where I went out prudently and died anyway.

The gun went off and Old Blue Eyes began his serenade and the next seven miles went by as fast as anything in my life has, besides maybe active labor. I remember the ramp off of the Verazzano, and how already the streets were choked with spectators, even though we hadn’t yet run anything worthwhile. I remember running under the BQE and catching friends at Fourth and Ninth, and how the clock tower of the old Williamsburg Savings Bank acted like a mile collapser, because past it I’d be coming into my own neighborhood. And then, yes, the eighth mile stretch, made even more glorious because there was a baby to hug and a husband to kiss (and then, shamefully, grouch at for forgetting my water bottle), and then miles 9-11 coming at a rapid clip, with 10-11, which went through the more Hasidic part of BedStuy/Williamsburg, being more quiet than any miles since the Verazzano, and then huge crowds in North Williamsburg and Long Island City, where I hit the halfway and thought that if this had been a half, I’d have finished feeling just dandy, but as it wasn’t, I was soon due for some pain. Which started to come not coming off the Queensborough, as many had suggested it would, but a few miles later, on First Avenue. The crowds in the Upper East are as thick as anywhere — too thick to find your people, though still fizzy and enjoyable. By the Willis Ave bridge into the Bronx, I was barely limping along, and the last six miles, through Harlem and back into the Upper East and into Central Park for the finish, were a real slog. I was rueing having written my name on my shirt, let me tell you. And then, after the sweet, sweet relief of the finish line (mixed with a slight pang for having missed qualifying for Boston by a matter of minutes) of course, the real kicker: the two mile hobble out of the park. Honestly, it’s probably a good thing, lactic acid-wise, but I walked those miles at about the pace of my son’s army crawl.

Anyways, bucket list item checked and very happy to have done so, and yes, it’s a memorable way to see the city, even if the Bronx gets short shrift, but: spectating is the more enjoyable experience. If you’re here and free tomorrow, join in (the course map is here)!